The art of extracting cannabinoids has been evolving quickly, but until now we have been excited at levels over 65%. We were jumping over the moon at 80%. What we are playing with now in the world of cannabis distillates is definitely not for beginners!

In the process of extraction, a large volume of other material ends up in the final product. However, after distillation, what is left is essentially pure THC or CBD. This new technology is astounding, and is going to change the way a lot of dabbers experience marijuana!

How do they make cannabis distillates? 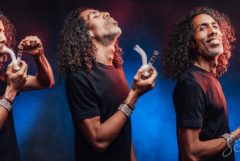 There are some concentrates that are solventless, such as marijuana rosin. Although these are generally much cleaner in terms of their content, they don’t reach potency levels as high as oils and shatters made with solvents.

Furthermore, oils and shatters made with solvents don’t reach the potency levels of distillates! So now, things get more interesting. After the process of extracting the cannabinoids with a solvent, the process of distillation begins. In fact, cannabinoids have an extremely high boiling point, which means special technology is required to distil at lower temperatures.

The special manufacturing process is called “wiped film short path distillation”. It is a huge, very complex and intricate machine. As described above, it takes place in two parts. Firstly, it separates the terpenoids and flavonoids from the plant material, leaving the cannabinoids and some lipids and other impurities left behind from solvents.

The second step is distillation, leaving behind pure THC or CBD. By the way, the terpenoids and flavonoids that are removed at the beginning can be reintroduced into the distillate at the end.

What are we going to do with distillates?

What exactly is the market application of a product that is over 99% in potency THC or CBD? Well, firstly, it’s pure – meaning you’re going to be able to do basically anything with it. If you put it in a bubbler and dab it, its effects are going to be extremely powerful. Secondly, it’s extremely powerful! That means that a very small amount of it is going to go a very long way.

So, with basically pure CBD or THC oil, there will be the opportunity to vape, dab or even eat it. These distillates will certainly make it into many vape cartridges, into many edibles and on to the end of many dabbing pens. For the consumer, this means having access to a product that is pure, potent and most of all, consistent. For both recreational and medical markets, this will probably mean a lot.

Have we taken things too far?

It isn’t unreasonable to question if we have taken things too far with something this potent. To put it simply, we already get super high. Even for medical reasons, maybe more is not better.

It is important not to forget about the nature of herbal medicine and the role that the whole plant plays. There are many references to the ‘entourage effect’ – or the synergistic effect of all of the compounds inside of marijuana. It is arguably this effect that makes cannabis such an effective medicine.

I suppose that many cannabis users are still going to prefer simple buds, as many continue to do despite the availability of concentrates. But still, a product as strong as a 99% distillate is probably going to change the way that a lot of people ingest marijuana. Is it a good thing to have a product this strong so readily available? Well, that’s a matter of opinion!

1 thought on “Cannabis Distillates: The Future of High Potency Marijuana”